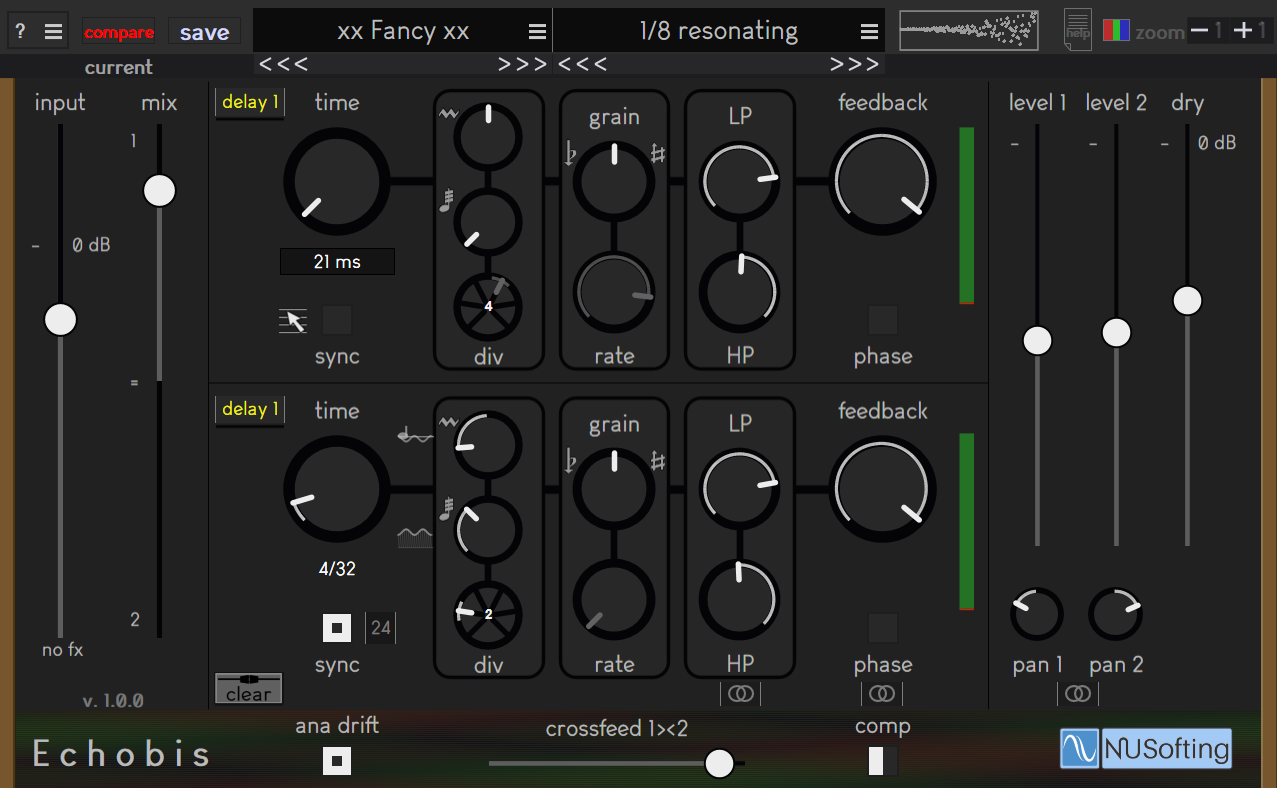 “Build mesmerizing rhythmic atmospheres.
Get fresh new grooves on the fly from your drum loops and much more”

Overview:
The two delay-lines can be mixed, panned, cross-feeded.
And each of them allows very quick setting of many tempo divisions.
Polyrhythmic echoes have never been so easy.

*The amplitude and pitch modulators are sensitive to the audio input onsets.
This mean that they accurately follow the level of the input and keep the modulations in sync with the echo repeats.
The modulators are inside the feedback loop, so that modulations deepen more and more at each repeat.

**The granulizers, instead, are free-running with adjustable rate,
but still inside the feedback loop. Thus allowing incremental drifts.
The GUI is resizeable, featuring peak meters for the two feedback levels.
11 GUI themes ready to use, also you can make your own.

Price: 9.00 € intro price until June 29 2022
Available as 64-bit AU and VST2 plug-in: Mac(native M1 and intel) and Windows(intel).
Check the video on YouTube, or just download the demo plug-in and try it yourself. https://youtu.be/Fa8w5fJaTNg

Others:
– The plug-in toolbar, beside what you would expect, features a *randomizer ribbon*
and a colour scheme selector, with many schemes (themes) already built-it.
(You can make your custom theme/appearance editing a very simple text file)

No copy-protection:
Buy it once and you can do what you want* with it.
(*on the computers your personally own)

Check this intro to beat mangling with Echobis:

A short new video that feature Echobis on lazy flat strummed acoustic guitar, if you’re up for some cinematic textures (Lynch movies?) check it out:

The clip below plays 4 bars of dry plucks using Sinmad synth, then Echobis is applied. A soft  drum loop sample runs in the background:

Here next is a single note (Sinmad synth again) transformed in real-time by Echobis tweaking while recording. Good to check some of the textures this delay plug-in can create:

Listen to a beautiful ambient piano solo by Taron, using Echobis as only effect:

Saving within DAW project is disabled in the demo.